It’s hard to believe it’s February already, with the nation back at work and kids back at school after the summer holidays. While Australians flocked to the beach, it was business as usual on the global economic front.

All eyes were on the US in January, where newly installed President Trump hit the ground running. Markets took this as an encouraging sign that he would follow through on promised tax cuts and infrastructure spending, pushing the S&P 500 share index to record highs. An encouraging start to the US company reporting season and higher oil prices also boosted confidence, until confusion surrounding immigration policy prompted a late sell off.

In Australia, local shares lost ground over the month despite continued strength in iron ore prices and tame inflation. The consumer price index (CPI) rose by a lower than expected 0.5 per cent in the December quarter, taking the annual rate of inflation to 1.5 per cent from 1.3 per cent previously. This leaves the door open for a further rate cut by the Reserve Bank if inflation remains in check. The only fly in the ointment is continued strength in the local housing market. The Australian dollar finished the month above 75 US cents, well up on its low of 71.7c in December. Longer term, observers expect the US dollar to firm if the US Federal Reserve lifts interest rates and President Trump rolls out his pro-growth agenda as expected.

Achieving your dream of early retirement 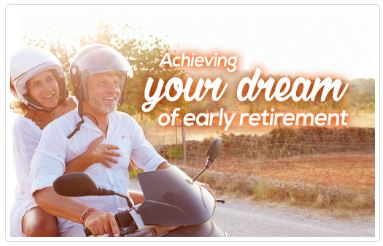 Spending more
time with your family. Picking up a brand new hobby. Exploring exotic destinations for longer
than your scant weeks of annual leave would allow. However you paint it, retirement is a beautiful goal to work towards. And starting early means you’ve got more time and energy to enjoy it.

Early retirement has become a popular financial goal for Aussies from a wide variety of different backgrounds and circumstances. A 2016 global survey found that out of 17 countries surveyed, Australia has the one of the highest proportion of people wanting to retire early. In fact, 75% of Aussies aged 45+ wanted to retire within the next five years – as much as fifteen years before pension age.i

Unfortunately, most cannot afford it. There’s a big disconnect between those who want to retire early, and those whose finances will allow them to stop work.

What do early retirees have in common?

Those who successfully retire early aren’t just lucky, or from wealthy backgrounds. A US-based study found that early retirees fostered habits and abilities that allowed them to build their wealth sustainably over time.ii

The first is the mindset and discipline necessary for saving. Consistently choosing to save rather than spend – plus compound interest – means real wealth is built over decades.

Speaking of decades, early retirees are more likely to have set long-term goals and focused on them. There’s a psychological reason that this is difficult for many people. Our brains are hardwired for instant gratification and it doesn’t just affect our propensity to snack or hit the sales. Anything we can see, or at least visualise strongly, is much more attractive than anything that’s too far in the future to picture.

Of course, good habits in both these areas are less effective if they’re not shared by your spouse. A spender can undo much of the good work of a saver, even if their finances are not completely intertwined.

Then, there’s the advice factor. That study also found that those who retired early were more than twice as likely to have worked with a financial professional.

How to work towards a comfortable early retirement

Do you want to retire with time to enjoy your golden years? There are plenty of ways you can start building towards an early retirement.

Want more help on making your early retirement dream a reality? Contact us to arrange an appointment.

some retirees losing some, or all, of their pension entitlements.

The big question now is whether the tighter assets test will encourage people to change the way they plan and behave in the years leading up to retirement to qualify for the age pension.

Human nature being what it is, people tend to worry more about a financial loss than they do about missing out on a potential financial gain. This is a common decision-making error described by behavioural experts in prospect theory.i When you apply this fear of loss to the tightening of the pension assets test, there is a danger that people could become so worried about losing even a few dollars of age pension that they make knee-jerk financial decisions that leave them worse off in the long run.

Under the new rules, retirees will lose $3 a fortnight for every $1,000 in assets they hold above a certain threshold, up from $1.50 under the previous rules. Even though the thresholds are higher, allowing more people to qualify for a full pension, fewer middle and higher income earners will qualify for a part pension.

The obvious solution is to reduce your assets, right? Maybe not, if doing so means you end up shooting yourself in the foot.

On the surface, getting rid of assets may be tempting, especially for anyone near the upper asset threshold. Single homeowners lose the part pension once their assets total $542,500 ($742,500 for non-homeowners), for homeowning couples the upper threshold is $816,000 ($1,016,000).ii

The incentive for reducing assets is that retirees stand to gain $3 in pension per fortnight (or $78 a year) for every $1,000 of assets they use up. The argument goes that every $100,000 of assets you enjoy spending today is worth an extra $7,800 a year in pension. That’s equivalent to a return of 7.8 per cent, far better than money in the bank.

There are lots of ways pre-retirees could choose to use up some of their assets to qualify for the age pension. You could take a big trip, pour money into renovations or buy a more expensive house (the family home is exempt from the pension assets test). Or you might decide to give the kids and grandkids part of their inheritance early.

Of course, there’s nothing wrong with any of these decisions if you are confident that they won’t leave you short of funds in retirement. But if the sole aim is to maximise pension entitlements, you could well be selling yourself short. For one thing, it ignores the potential opportunity to sell assets in retirement to supplement your income when needed.

The goal of retirement planning is to accumulate enough assets during your working life to provide a comfortable standard of living for what could be 30 years or more of retirement. For all but the very wealthy, this will most likely be achieved by progressively drawing down capital to supplement a superannuation pension and part age pension.

Such a strategy is likely to result in higher standard of living in retirement, especially in the early years while you are fit and healthy and may want to travel. Then, if your savings expire before you do, there is always the full age pension to fall back on. But if you run down your assets with the sole objective of qualifying for the pension, your choices could be limited.

Plan for the long haul

Everyone’s retirement aspirations and financial circumstance are different. But in the long run, a strategy that maximises your sources of readily accessible cash in retirement, rather than focusing on a single income stream, is more likely to provide a comfortable and worry-free lifestyle.

If you would like to discuss your retirement income needs, don’t hesitate to call. 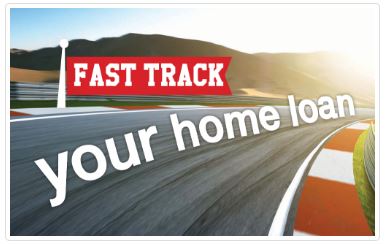 With interest rates on the rise, now is the time to look at ways to fast track your mortgage. After all, the sooner you pay off your mortgage, the less you will pay in interest.

That’s probably why nine out of ten Australian mortgage holders told a recent finder.com.au survey that they try to pay back their mortgage ahead of time.i
So what are the ways you can fast track your mortgage and minimise your interest payments?

The most popular strategy is to make extra payments. Rather than paying your designated monthly repayment, why not pay more? Not only does this reduce your interest charges but if rates should rise you will be able to absorb the increase.

More frequent payments are also a good strategy. Instead of paying your mortgage off monthly, pay half the monthly amount each fortnight. After all, there are only 12 months in a year, but 26 fortnights, so you effectively end up paying an extra month each year.

Most home loans are structured so you pay mostly interest in the first five to eight years without making any inroads into the principal. If you can manage to pay some principal off too during that period, then you can cut the interest you’ll pay on an average 25-year loan.

An offset account can also prove useful. With your salary going into your mortgage account, the principal will drop and that means you will pay less interest. For instance, if you had a 100 per cent offset account with $30,000, on a home loan of $400,000, you would see interest only calculated on a balance of $370,000 instead of $400,000.

If you’re looking at a honeymoon rate on a new home loan, do your homework and make sure that the rate you pay at the end of the honeymoon period is not substantially higher. If that is the case, it could eliminate any gains you may have made in that first year of lower rates. But be aware that switching to a cheaper loan might incur a high exit fee.

It’s always a good idea to review your home loan annually to make sure it’s still working for you. For instance, do you really need all the bells and whistles that are on offer? Often, you’ll be paying for these extras through higher interest rates.

If you are unhappy with your current rates, then talk with your existing lender to see if you can negotiate a better deal. But make sure you do your homework first and check out what other lenders are offering so that you are in a better negotiating position with your current lender. Most lenders would rather hold on to existing clients than lose them to a competitor.

When you initially take out a loan, consider making your payment before the due date. That way you are always ahead of the game.

With interest rates expected to rise in 2017, this may be a good time to consider fixing part of your loan to cushion yourself against future rises.

If you want to make sure that you are doing all you can to minimise interest payments on your loan and fast-track your mortgage, call us to discuss the financial strategies that might work best for you.

i ‘Aussies go above and beyond to pay down home loan sooner’, Nov 2016, finder.com.au